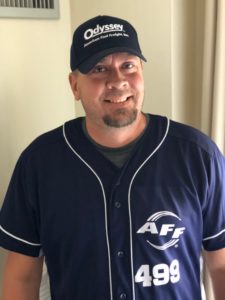 Ryan Surian has worked for American Fast Freight for 9 years. He started his trucking career out in 1999 working for “The King” aka, Burger King, driving a single axle Kenworth with a 28-foot trailer. Ryan learned the world of trucking at a young and impressionable age.

Moving up in his career as a professional truck driver, Ryan has worked both locally for our Alaskan community and down in the Lower 48. Giving him that extra “umph” in the trucking world and experiencing the trucking life outside of Alaska.

Ryan returned to Alaska and started his career with American Fast Freight (AFF) in 2009. A seasoned driver with the company, Ryan runs the local route in Anchorage.

Competing in multiple divisions at TDC, Ryan has gone to NTDC to represent Alaska 3 times. AFF is proud of Ryan and his safety and professional driving. This year, Ryan received Grand Champion at the Alaska TDC placing 1st in his division of 4-Axle. An achievement every driver strives for. This just shows how dedicated and a safe driver he is.

Ryan said, “He is proud to represent AFF and Alaska at Nationals this year. It is truly an honor and privilege to be here.”

On behalf of Alaska Trucking Association, “We are so proud of you, Ryan!”